I left Ten Sleep with one hope in mind… that after driving clear to the middle of Nebraska… Dally would stand for the mate I’d debated and agonized over!

The cool thing about English Shepherd breeders, is that there aren’t many *out there*… and that makes for a small community where we know each other by name, emails, and postings on Yahoo Groups.
The bad thing about English Shepherds is that it is a small gene pool… and finding what you want without line breeding can pose some difficulties!
It would have been VERY easy to just breed Dally back to Lucas.
He’s what I was looking for…
outgoing…
loyal…
great instinct…
nice build… (allowing for crippled hips and perpetual sore paw!)
and sable!
AND VERY VERY CLOSE!
(As in… just on the other side of the door, since Dally is at my feet!)
I’m not saying they’re not out there…
but the ones that I found to be relatively close (ha-ha, I made a funny!) were also related…
I’d have to back off on some of my requirements!
Meaning, mostly… the sable color I’m so in love with!
With much help from friends in the English Shepherd community, I narrowed it down to nine candidates.
Then three.
I talked to more people.
I hemmed and hawed and then Dally came into heat a month early.
Time to make a decision.
One *more* conversation, and I made my choice.
Honestly, I’ll admit, weather played a part in all of this as well, with a storm heading for the northern Washington, Idaho, Montana areas, I looked east instead.
A phone call or two… or three…
I made a date for 10 days into her cycle, the days I’d noticed her standing and receptive in her other heats.  If I got it right… the trip would be worth it.
Hustler is a feedlot dog… working everyday with livestock… sheep, goats, and cattle.  He’s in fine shape, definitely legged up with an athletic air about him.  He is Derek’s shadow, in cars, trucks, and tractors.  He’ll catch goats, he’ll work the yards.  Although Derek said he could be standoffish with strangers, I didn’t see that at all… not with me!  He was a tail wagging love-me-give-me-some-attention English Shepherd like I’m used to!  And what a talker!  He was wohrwohring his excitement even before I introduced him to Dally!  He was given an instinct test when Derek got him as a pup… and passed with flying colors.  After talking with Derek, and watching Hustler move, investigate, and introduce himself to me… I quickly liked what I had traveled all those miles to see!
Hustler had passed inspection with me… what would Miss Dally think?
(to be continued…) 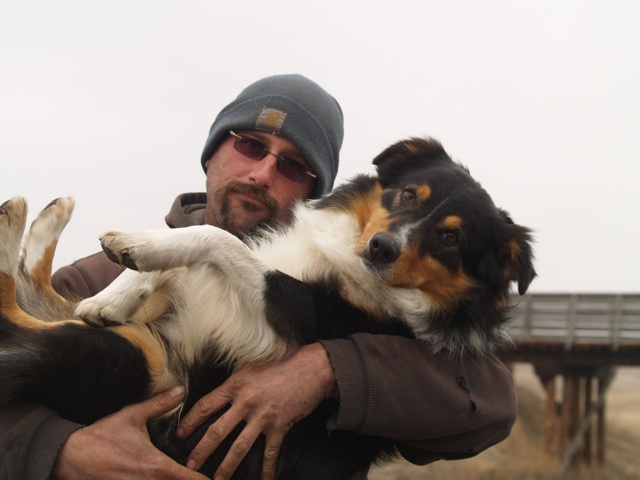