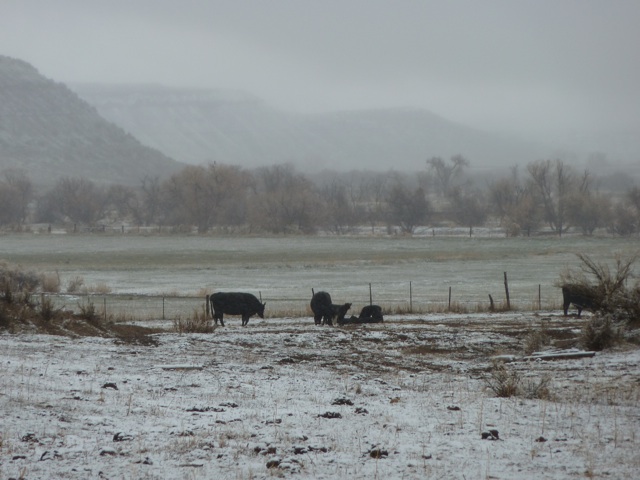 As grey as yesterday was… hovering over our miserable-ness like buzzards… today was a gorgeous brilliant Wyoming day!  Sunshine.  Warmth.  Red rocks and sagebrush alike washed by yesterday’s rain/snow mix into gleaming versions of their usual dusty selves.
I waited on Johnny’s arrival… sauntered to the creek’s edge and closed my eyes.  Robin to my left.  Meadowlarks behind and along the fence row.  Pheasant down in the field.  Chickadees through the willows, red-winged blackbirds everywhere.  A knocking down at the cottonwood signaled Red Shafted Flickers and yes, yes, even the faint gobble of a wild turkey.  Wow.  The birds are happy today.  Each call distinct and easily recognizable… It’s those other chitchits and whirrs I have troubles identifying.
A downshifting motor, and it was time I fed again, calves running, tails erect over their backs, twisting and dodging alongside the tractor.  There were those others that chose instead to soak up the warmth… sunbathers yearning for that first exposure…  each would grab a dry flake of hay, and nestle into it, while mother nibbled on the corner.  Content.  Muscles relaxed.  Warmth enveloping them.  No wind.  Just feel the intensity of those rays!
I was overdressed for the day myself… though the only thing I managed to shuck was the scarf from around my neck.  I hate pulling off layers while pitching hay… pick them up again and they’ll be covered in prickly bits of hay FOREVER.  Better to sweat through the layers.
Grunting and twisting, sliding each flake along the edge of the trailer until gravity could take it and pull it to the ground.  Today, only two bales were troublemakers… insisting on making me work and sweat.  The other bales were easy enough, a stab or two, a twist and grimace, over and over, seeking a rhythm.  The looser hay difficult in its own right, a pitchfork going clear through flakes on occasion… as evidenced by the pitchfork scrape on my left shin.
But soon enough I was done, and I returned home with dogs in tow… wandering the edges of the fields, wondering what would I do if I could create a Dog Haven.  Boarding, agility, herding clinics… what would it take?  How could we do this?  What creative concepts could I come up with?  Where would fences need built?  Where would the goats/sheep live/graze?  It’s nothing but a dream… but what else is spring for, but to bring a promise of new life/new ideas?
****
April 11, 2010   Peace in My Soul
April 11, 2009   Relax
April 11, 2008   No entry.
Find me here!