Honestly, I don’t know *what* was the problem.  I am NOT mechanically inclined.
Now around here, four wheelers are USED.  Not just for running around taking in the scenery on a few trails… but USED.  They run up and down the highway to wherever the guys need to irrigate, then they cross creeks, zip up and down hills, bounce across corrugated fields.  They haul salt and mineral and hay and dogs and fencing tools and sometimes, multiple people!  We literally put thousands of miles on our four wheelers… and trade them off (usually) before we tear them up too bad!
This Suzuki wasn’t too old, Vernon liked it… and so he decided to repair it on his own.  He pulled the engine.  He couldn’t break it down far enough to reach the problem… and then… trying a *little harder*… oops.
Yeah.
Not good.
So he placed an order on the good ol’ internet… and a large heavy box arrived.  He’s been tooling around on the motorcycle… and in my Durango… and in his pickup… But finally, he had time yesterday to start to put in the new engine.
I walked out to the shop and BEHOLD. 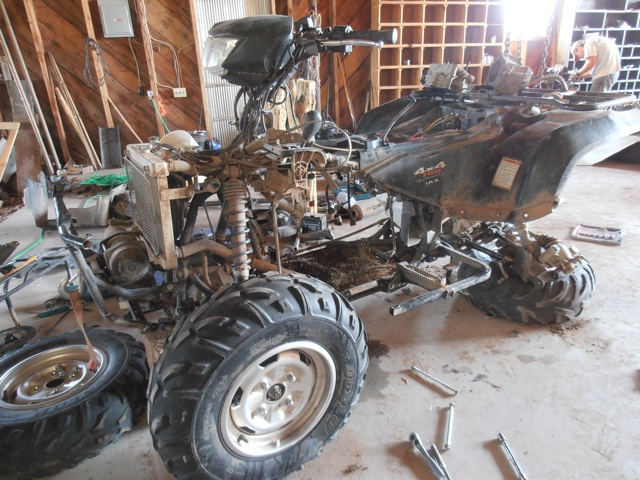 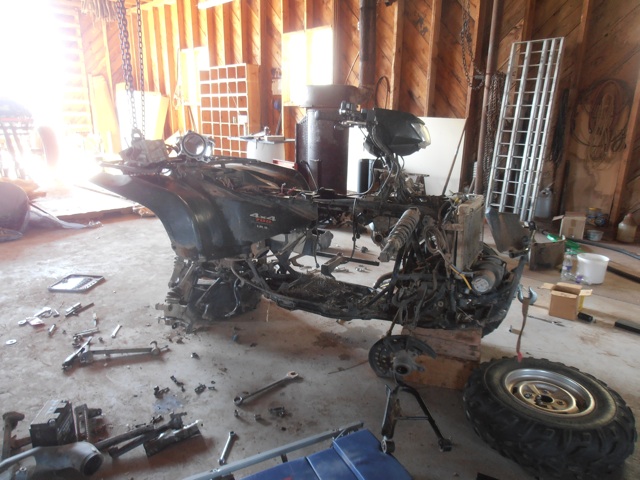 The parts are strewn all over the floor, in no pattern that I can tell…
Here’s the new engine, all shiny and bright. 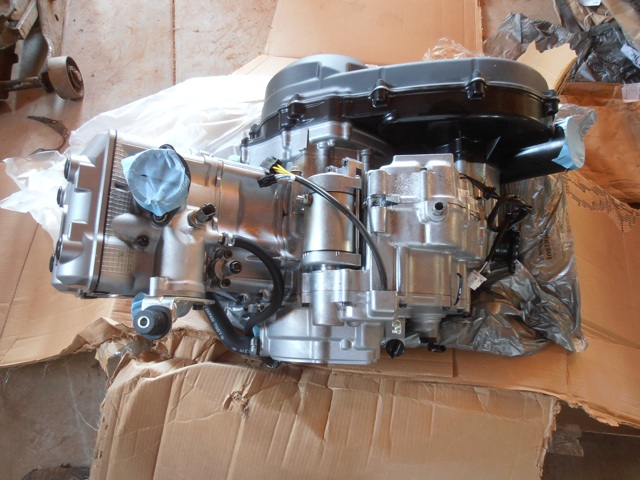 That won’t last long…
I escaped from the shop and headed out to mow some lawn…
A couple hours later, I heard the four wheeler start up!  I was impressed… he got it running!  Then a few seconds later, he comes driving out of the shop, standing up on the foot brackets.  It was a totally naked four wheeler… no plastic, no seat in place, but it was running!
HOW DOES HE *DO* THAT?????????????????????
Today he took a couple more hours, and this time, I helped…
“Hold this.  Where’d I put that screwdriver?  Can you shine that light over here?”  (The extent of my mechanical help is limited.)
The four wheeler is no longer naked… all the green plastic is in place!
I am always simply awestruck that Vernon can do this… and three weeks later remember how to put it all back together.
And it works.
Never ever ever ever ever could I accomplish this!  I’ll just shake my head and say once more, “HOW DOES HE *DO* THIS?”
****
Last chance for a question for tomorrow’s Q & A… Leave it in the comment section.
****
September 12, 2010   Four Minutes of My Day (a popular video)
September 12, 2009   Photoshop Playday
September 12, 2008   No entry.
Find me here!