I wander outside this morning… move my chicken tractor and let the chickens out… and begin visiting with Johnny.  He’s here, along with almost everyone else, to load out a truck load of heifers.

Tully, self-appointed Alpha, is in a Big Fight with little Chabot.  Even though Chabot is out-weighed, she’s tough and she’s giving just as much as she’s getting!

Dally steps in as concerned mother, but stands over them, helicoptering, not really breaking up the fight.  I leave dog correction to the dogs for the most part, the nuances of correct dogly behavior way beyond my human intellect.  I’m not concerned.

Then Grandmother Elsa comes into the scene.  By golly, if Dally can’t keep those kids in line, Elsa sure can!  She starts to and WHAM!  Dally is tired of being second fiddle and correcting *her* puppies seems to be the last straw!

It’s an all out I’m Gonna Kill You Fight.

The pups are fighting, Dally and Elsa are fighting… my, isn’t dog ownership just *great*?

My main concern is the pups, they’re going to their new homes soon, I really don’t want one of them with a ripped ear or maimed leg!  Believe me, this is not a “Mom, she touched me!” kind of fight.  The little poops are really going for it!  I grab two back legs and pull them apart, and they continue to fight hanging upside down and stretched apart.

Finally, they stop and I put Chabot down, thinking I can put Tully inside my fence and create a barrier!  As I start to lower Tully, here comes Chabot, still madder than MAD, and I yank Tully back into the air.  Chabot’s little puppy teeth land on my shin instead of Tully, and I’m very glad I have jeans on!  (I now have a *wonderful* bruise to accompany the tiny punctures of baby teeth!)

Finally, they’ve cooled down a bit, ruffs mussed by saliva and spiking in multiple directions.

I’m off to the Big Dogs who continue to Kill Each Other.  It’s been coming… this reversal of roles… Dally is tired of being low bitch on the totem pole, Elsa just can’t step aside gracefully, and I know they need to work it out.

However, one glance at Elsa and I’m throwing in the towel for her.  She’s still fighting back, though winded, but I know Elsa’s teeth are barely there… dulled by her years of hunting.  Dally’s are healthy and sharp as evidenced by the huge gash now stretching across Elsa’s back.

With a bit more convincing, they separate, and I lock Dally in the yard.

I took pictures.  Of course, I took pictures.  And I took pictures at the vet’s where he stitched her back together.  And tomorrow I’ll take pictures of Poor Elsa.  For those of you ready to leave now, go ahead.  She’ll be ok.  But she’s sore and tender and has two pills to take (and she HATES taking pills) and I’m just giving you fair warning.

But for those of you interested in veterinary medicine, stick around.

Are they gone yet? 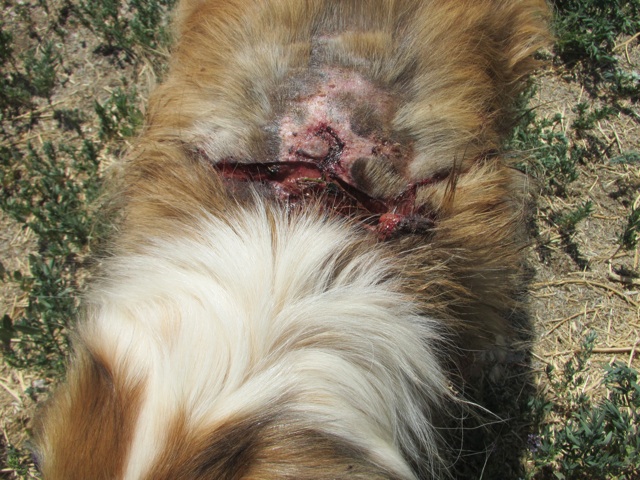 Yes, I had a closer one… decided not to gross you out TOO MUCH! 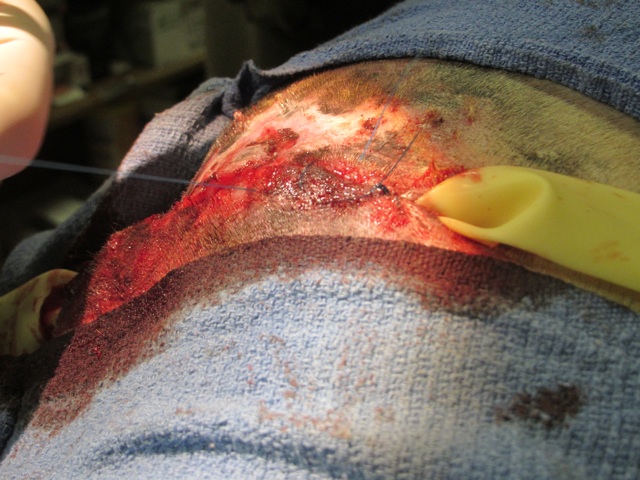