We started this the other day… I’ve grouped them all together for better reading. 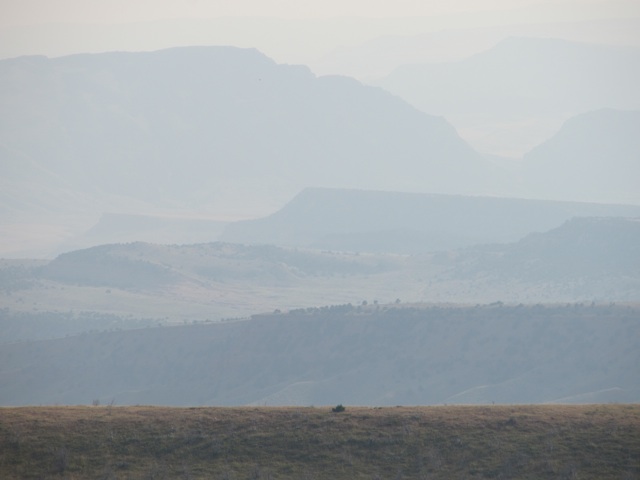 The thick mist lay heavy on the uneven ground, making their lungs work even harder than their long legs were… the wanderers had miles behind them… yet miles left to travel

For they had purpose and drive to see what no man had seen before them. New wild lands, exotic human beings who had learned to live off the wild buffalo and game of this vast land.

as the leader of this small band lifted her head again to check the scents floating on the breeze she wondered why there was no softness to the air,no hint of water had touched her nostrils for the second day.

She knew that the must find water soon as the journey had been hard on them already. They were getting weaker by the day.

Suddenly, her dog Rojo stopped in his tracks, staring off into the distance with a low growl. She followed his gaze. Up on the rise she saw four horsemen, their lances and headdresses unmistakable…

The yearling colts were trying to find the band that disappeared in the fog and mist.

The leggy foals were breathing as hard but that wouldn’t have been the case had they trusted her to find a safe way through the bogs. She had to fight them through each one, taking time to dally their leads round the horn and pull them with her big footed Shire mare, Sally. Why was she sent to do this alone? Her head ached as hair frizzed from beneath her cap and Sally was in a lather. She pulled up to allow the big mare to breathe. That’s when she heard the odd sound, muffled by the fog. Sally heard it too, ears indicating the direction as accurately as a compass.

The hairs on the back of her neck prickled as she considered her options……Do I run? But where? And my horses are winded as is. Tension was building in her little herd, as now all ears were pricked at the sounds coming from the fog. No, I can’t run, got to stay and face what’s coming from right here. I have to settle these yearlings down or it will be another day trying to find them again, if I don’t keep them under control.

It was a rumbling sound …. almost like thunder but then again maybe not. Sally’s ears swiveled as she looked to the west. The wind was picking up bringing hope the fog would be blown off this endless high plateau with its drop offs and bogs and fallen logs. The dampness was odd though as thunder storms do not normally accompany dense fog. Then Sally whirled and looked to the north – more rumbles. The ornery buckskin yearling that had appointed herself the class troublemaker did all she could to get the youngsters to run and before long they were forgetting how tired they were in order to run blindly about. Cold as she was, Lorena felt her palms go clammy.

They had many miles behind them and who knows how many to go, totally because none of the men in the band of drovers would ask for directions. Now two of them had allegedly gone off to scout for a better less boggy route while the third that was meant to stay and help her had apparently ridden off a cliff in the fog. He hadn’t been seen for two days, but then very little HAD been seen. She was hungry, cold, being devoured by mosquitoes, and quite frankly mad as hell. For three nights now she’d had to build a rope corral which was basically useless and then try to find enough dry wood to build a fire. It never was a warm fire but the smoke helped with the mosquitoes a little … Her mare and the cow dog that the men called “Mammadawg” were her only reliable companions in the dark nights — and dark days. Would this cussed fog never lift? There was one cold biscuit left. She shared it with Mammadawg and envied her mare and the yearling’s feasting on meadow grass.

Thanks to Belle, Patr, Joy, Dana, Ketra, Terry, Cammy, and Gillian!  It turned out fairly well… for our first time!

Any questions for a Q&A session?  I only have one so far!