In case you haven’t been following my Twitter feed (also posted on the side bar and on Red Dirt’s Facebook page), I’ve been in Casper the past few days attending the Wyoming Library Association’s convention.

This is only my second one… last year it was in Cheyenne… and it was great as well.  (with the exception of the loss of my magnificent, inherited, handmade turquoise bracelet!)  I’ll never forget that part!  <sniff>

The opening reception was at Casper College‘s library.  And I admit, I only teared up once.  Why?  Casper College was where my mom began to work when we moved there in 1970.  She continued to work there through my attendance at Casper College, retiring a bit when Daddy began to really fight his losing battle with cancer.  After a few years absence, she returned to work as the CC President’s secretary.  Boy, oh, boy, do I have great memories at CC… hanging out with the staff, knowing professors before I attended school, pulling pranks on the young work study girls!  I even worked a few summers there, painting dorm rooms and married student housing!

My friend asked me that evening if there was anywhere else on campus I’d like to visit.  Oh, my.  How my heart longed to go to the Administration Building, through those familiar doors, then turn right into the President’s Office, and see that woman elegantly stationed at her desk.  Graceful long skirt and matching blouse, and jewelry… always gorgeous jewelry.  A soft smile and gentle voice, always welcoming, always professional, always loving.

“Was there anywhere else on campus you want to go?”

“No.”  Softly.  “No.  I really don’t think so.”  A glance around at the red brick and red stone retaining walls…  a significant piece of my heart definitely lies at Casper College… but more of my heart lies with the Red Dirt of home.

Thanks, Casper College, and WLA, but I’m definitely a Red Dirt Girl. 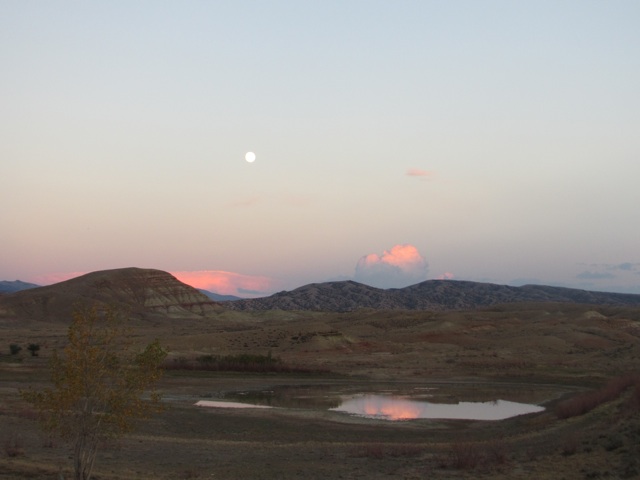 (heading home over Cottonwood Pass, a sunset reflects on a reservoir)