Cool and rainy and a week later… it was time to check on my bees!

My Golden Hive has slowed down for the most part, although they’ve started replacing comb from the one I stole with the queen cells.  There seems to be more drones and remember the comb with the two queen cells on it?  Well, one was closed and one open and they looked like they were working on the open one.  I think they’re still planning to swarm and my theft of the four queen cells last week just slowed them down.  I have two bee books ready for me at the library, maybe they’ll answer some of the questions I have!

I switched over to Mesopotamia, and a quick look was all it took to see my first attempt at a split hadn’t worked.  Two lonely bees remained on the comb, the four queen cells were empty.  Upon further thought last week, I probably should have given them more workers, (like the two or three pounds of bees you buy in the springtime) and closed the area up some instead of giving them the half of Mesopotamia.  Well, I could try it again, although I wonder where the new queen and her small entourage went???

Last, I checked Mesopotamia.  It still has the most bees, and it was cool enough that for once they didn’t attack me first thing!  They have started building straight new comb, which is a switch for them… and since I was not being attacked (and maybe my confidence has improved as well) I delved farther into their hive.  They are the cross combing-est bees!  There was no way to get farther into their hive without destroying comb… and I’d already ripped some off of the top bars… so… poo!  I just went ahead and pulled two bars off that they had cross combed upon.  So here I am, two combs lying in the bottom of the hive, covered in bees, the lovely bees that have always attacked me at first chance.  I actually just closed my eyes and reached into the hive.  Oh, I had my gloves and suit on, but still, I’ve never just done that!  I’ve tried to lift the comb out with my hive tool at least partway, but that wasn’t going to work this time.

It’s amazing what you can feel with your eyes closed and sensing the vibration of the bees.  Moving slowly, they’ll get out of your way, and you can tell if they’re getting squished under the comb.

When I looked, my hand and wrist were covered in bees, and they weren’t even that mad!  I think I only saw one bee stinging my glove, but stingers don’t usually make it through the leather.  I wish I could figure out a good way to video this for you!

I peeled off the remaining comb from the top bars, straightened things back up and closed them up.  The comb I had pulled out of the hive and off the top bars lay on my table top, still covered in bees.  These bees will find their way back to the hive by evening, and they can rob any honey out of the comb for the next few days.  Soon I’ll have to process some beeswax… I’m getting a fair amount stockpiled! 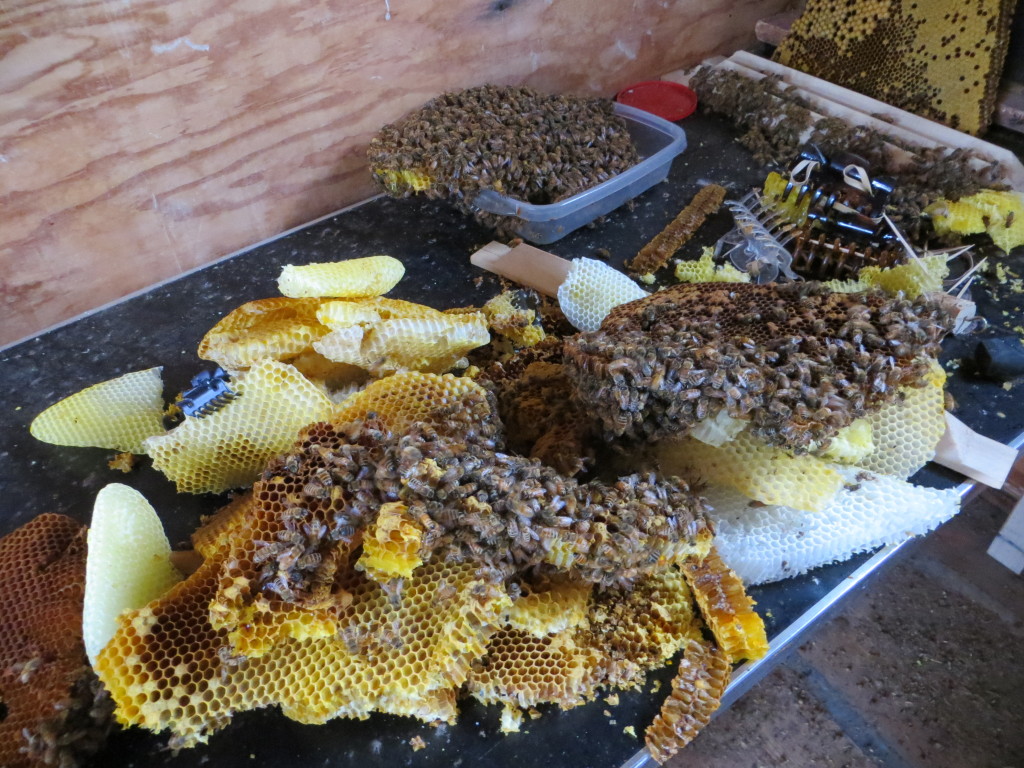