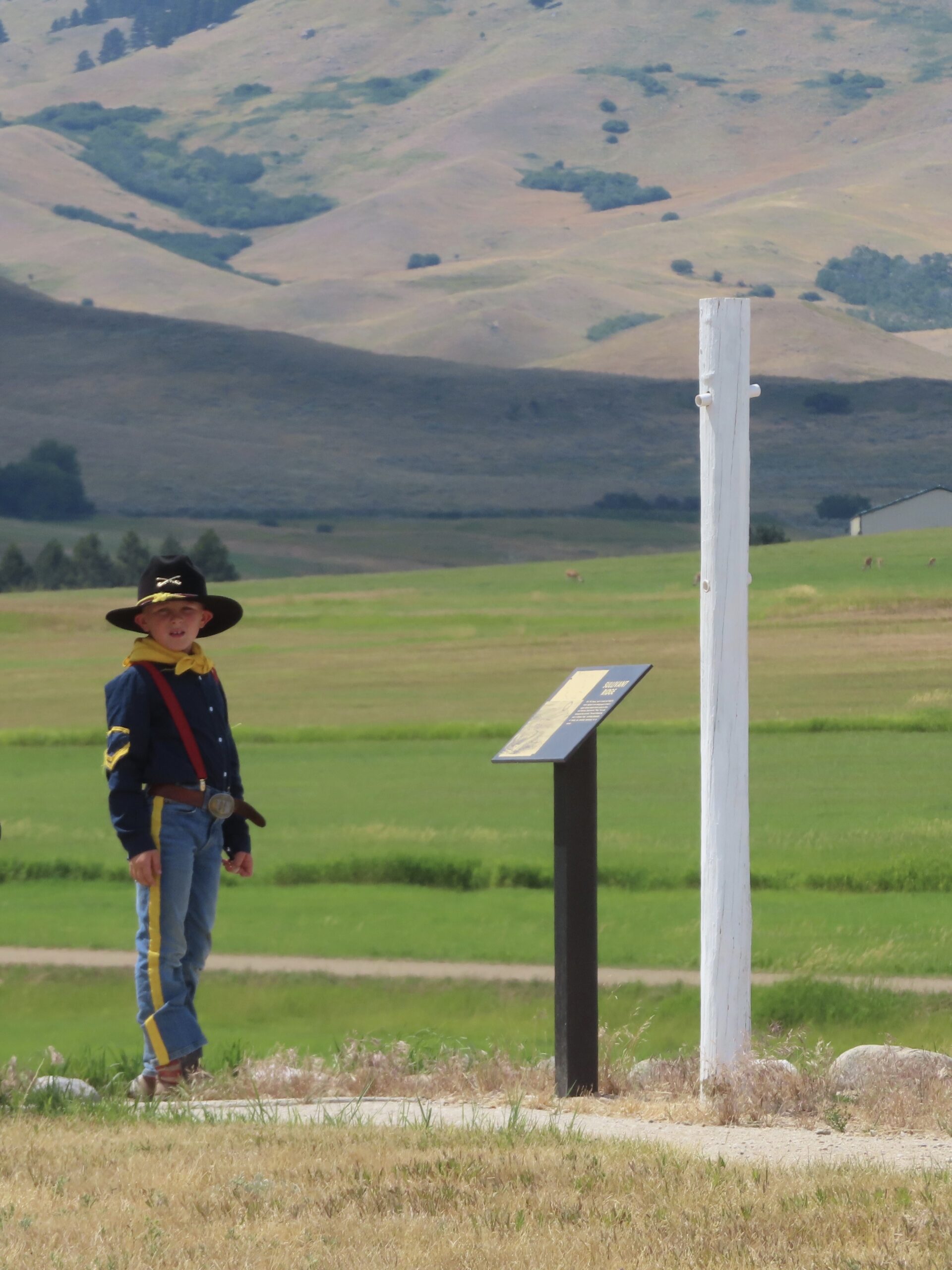 I honestly did not know the “monster” I was creating.

When Victoria and I came up with the idea that the boys would be cavalrymen in the costume contest at the kids’ rodeo, we didn’t anticipate the snowball. Sure, watch John Wayne in “She Wore a Yellow Ribbon”. Wear the costumes for ten minutes. I figured that would be that.

But the movie is now memorized. The costumes are worn often. “Cavalry! Cavalry!” echoes across the yards.

Time for our trip to Fort Phil Kearny.

Now I grew up going to Fort Caspar, and I love it… but I wasn’t sure the rambunctious little boys would actually take an interest since there wasn’t *real* cavalry present. I’d just shoot for the “local” Fort Phil Kearney over between Buffalo and Sheridan. A test run for showing some interest in history/cavalry/Indians.

Yeah. They loved it.

Did we get into the why’s and wherefore’s of the Indian Wars? No. They’re kids. Black and white. Good guys. Bad guys. Running. Jumping. Shooting. As they grow, I’ll share more. I’ll try to explain. They both have a smidge of Choctaw blood running through their veins… I want them to know both sides but you have to start somewhere.

Not to be confused with Fort Kearny, Nebraska. Different Kearny. Built in 1866 just after the ending of the Civil War. Three forts were built along the Bozeman Trail to protect the gold miners headed to Montana. Fort Reno, Fort Phil Kearny, and Fort C. F. Smith. Fort Phil Kearney was the largest stockaded fort in the west, with 4,000 logs in the stockade alone.

Trips to the mountains for wood were prime chances for the local Indians to take pot shots at wagons. The harassment was seemingly continual. In December of 1866, Brevet Lt. Col. Fetterman led 80 infantry and cavalry to aid the woodcutters, but by following the taunting Indian decoys instead, it led to their death. No one survived. There’s a great history written HERE.

The interpretive center was great.

Plus, they loved the boys’ costumes, too.

Lest you think I only took photos of Jaxon, I just want to clarify. I have photos of Quinlan… he’s just blurry or turned away. The kid doesn’t stand still for long!

We also went to the battle site and the Wagon Box Fight. More to come on that later.