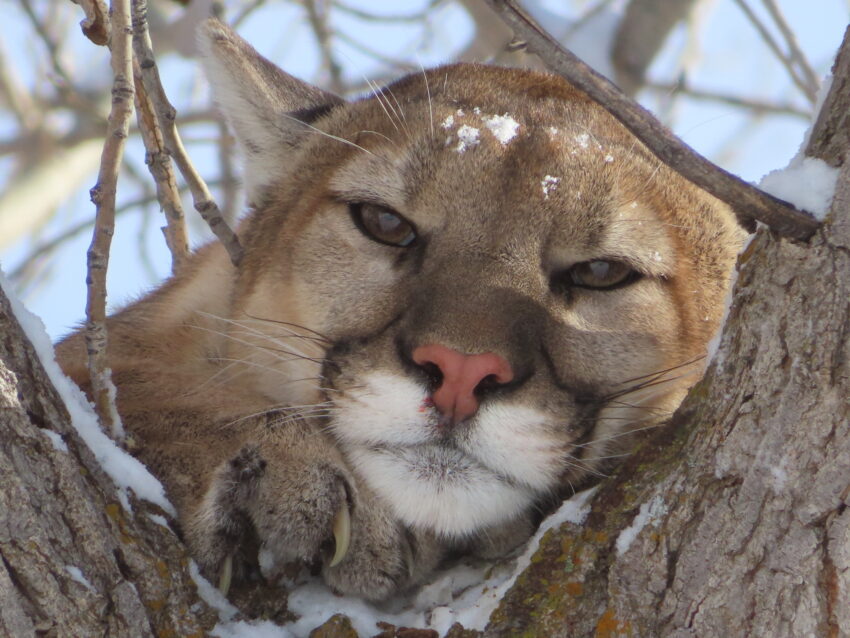 I’m getting over my little cold and I felt like getting outside. It’s -4˚ when I awoke, and barely above zero now… but fresh snow has fallen and the stuuupid wind isn’t blowing, so after a few chores, I head out. Tess had told me about some mountain lion tracks she had seen last week, so I head there thinking it’d be a perfect day to see tracks and put out my trail camera.

As I pulled into our place, going down what we call “the Beaver Slide”… there’s this.

You can see where she left the road, went through the fence and into the willows. Well, I decided to follow my original plan and go put my game camera somewhere else. This isn’t a “trail”, it’s a track. Hopefully, I’d still have luck getting some photos further on.

On my way back home, I ran into Daniel’s friend who is an outfitter and guide. He had traveled many a mile looking for sign. He has a hunter looking for lion. I asked him about the tracks and he said they were probably 12 hours old or so… and there were deer down in the willows… so the lion had probably just walked through last night. After a visit, I headed home to lunch.

As I began cooking, the phone rang. It was Daniel and his friend had a lion treed. Did I want to come back and take photos? Uh. YEAH.

I FLEW out the door.

After we all met up and started talking… turns out M. decided to follow those tracks into the willows, just to see which way they went. After tracking it a ways, he stopped, thinking… that cat could still be down here and he glassed the hillside and looked around… Three more steps and the cat blew out of the willows and ran off!

Come to find out… the tracks told the story of the lion coming upon a deer bedded down. She stopped. Looked. One pounce. A quick kill and a drag from the deer’s bed. Since she’d eaten, she spent the night and was simply hiding there (right where I rode in that last video I posted!) while I stopped my car for these pics.

M. released his dogs. Thinking she would head up the draw, M. walked that way. However, some neighbors were trailing cattle down the road and the idling pickup may have spooked her from crossing the highway. She turned and ran back the way she’d come and the dogs treed her right where this story started.

M. called Daniel, thinking he had a license. Daniel called me. We met up.

Can you see her?

With three dogs baying at the base of the tree, she’s not going to come down. We could approach. I did. Though at first, I was shaking so bad, my video isn’t great!

We quickly found out Daniel didn’t have a license, he was going to wait til January 1 so it would be good for 2022. Oh. Welp.

After the kids had gotten to see her and I had my photos… M. called off his dogs and put them up. We retreated to our vehicles and after a while, she was down and running off.

For some clarification… Yes, you can hunt mountain lions. They are considered trophy animals. After they reach their quota for an area, your license is no longer valid. Our area has a quota of 25 lions. Since I’ve seen 8 in the past year, 25 doesn’t seem like very many for such a large area!

Remember last year when I made the video about the lion kill being drug across the highway? And then the three lions I watched for weeks? That all happened within a half mile of here. If I turned around by the fence when I first got there, I could have hit both our centennial sign/mailbox and the lion with a slingshot (I throw like a girl, but I’m darn good with a slingshot!). My point is… Lions hanging out by my grandkids’ school bus stop and along the road home aren’t a good thing.

Hopefully, this pretty little lady will be discouraged from coming back. In a few days, we will be buying a license or two, and if she comes back, she may not get a second chance.

PS. I will be making a video…